In November, 32% of Americans traveled, wiping out all the slow gains since May. With raging new COVID cases across the country, this bleak travel number might actually be too high to help control the virus spread.

The U.S. added 4.2 million new coronavirus cases in November, amounting to 32% of all the coronavirus cases in the country by the end of the month. The wildfire-like spread of the virus prompted the Center for Disease Control and Prevention (CDC) and a number of other government agencies to issue warnings against travelling for Thanksgiving, the country’s biggest family travel holiday.

All these led to a sharp decrease in travel for the month. Despite the holiday, only 32% of Americans traveled in November, a decrease from 38% in October. This marks the lowest travel incidence rate since May. However, of those Americans that did choose to travel, a far greater share took flights than has been typical for the pandemic.

With case counts continuing to hit record highs, we believe this is just the beginning of a dark winter for the travel industry.

In this report, we highlight new trends in travel incidences, consumer sentiments and future travel intents distilled from our November Travel Tracker survey.

As many experts feared, the coronavirus has been spreading like wildfire in the U.S. as we move into the winter months. As of November 30, 13 million Americans were infected with the virus, increasing from 8.9 million the month before, and the death toll of the virus reached 250,000. The week before Thanksgiving, the U.S. Centers for Disease Control and Prevention (CDC) issued recommendations for Americans to avoid holiday travel. As a result, the U.S. travel rate in November dropped to 32%, from 38% in the previous month, making it the lowest rate since May. Despite the travel warnings, family gathering for the Thanksgiving holiday made up the largest share of November travel. Of all the trips taken by Americans in November, 45% were for visiting families, a seven percentage points increase from October. On the other hand, the decline of vacation share continued, dropping from 31% in October to 25% in November. Business travel rates remained low. Air Travel Had a Sizable Boost

Trips that involved flights went up for both personal and business travel. For personal travel, 9% of all trips taken in November included a flight, up from 6% in October. For business travel, the number is 27%, a four percentage point increase from October. The holiday air travel boost is supported by other data as well. According to the U.S. Transportation Security Administration (TSA) data, the number of travelers screened at U.S. airport security checkpoints surpassed 1 million for four days in November. For the past six months since March 17, there was only one day in October when the air passenger number exceeded 1 million. With family holiday celebrations, it’s no surprise that the share of staying with families goes up. In November, 28% of all personal travel were spent in private residency, increasing from 25% in October. This increase is purely at the loss of hotel stays, which went from 56% in October to 52% in November. Data from STR painted an even more dire picture for the U.S. hospitality industry. According to STR, the U.S. hotel occupancy for the week of November 22-28 fell to 36.2%, the lowest level since late May.

The share of vacation rentals continued to drop, down from 15%, the highest point, in July, to 8% in November. While the pandemic is partly the reason for this decline, the seasonality of the entire vacation rental market sans the pandemic plays a bigger role. As laid out in our analysis of Airbnb’s S-1 filings, Airbnb has consistently generated its full year of profits in the third quarter alone. Its biggest competitor Vrbo has similar huge swings in its revenues and profits as well. 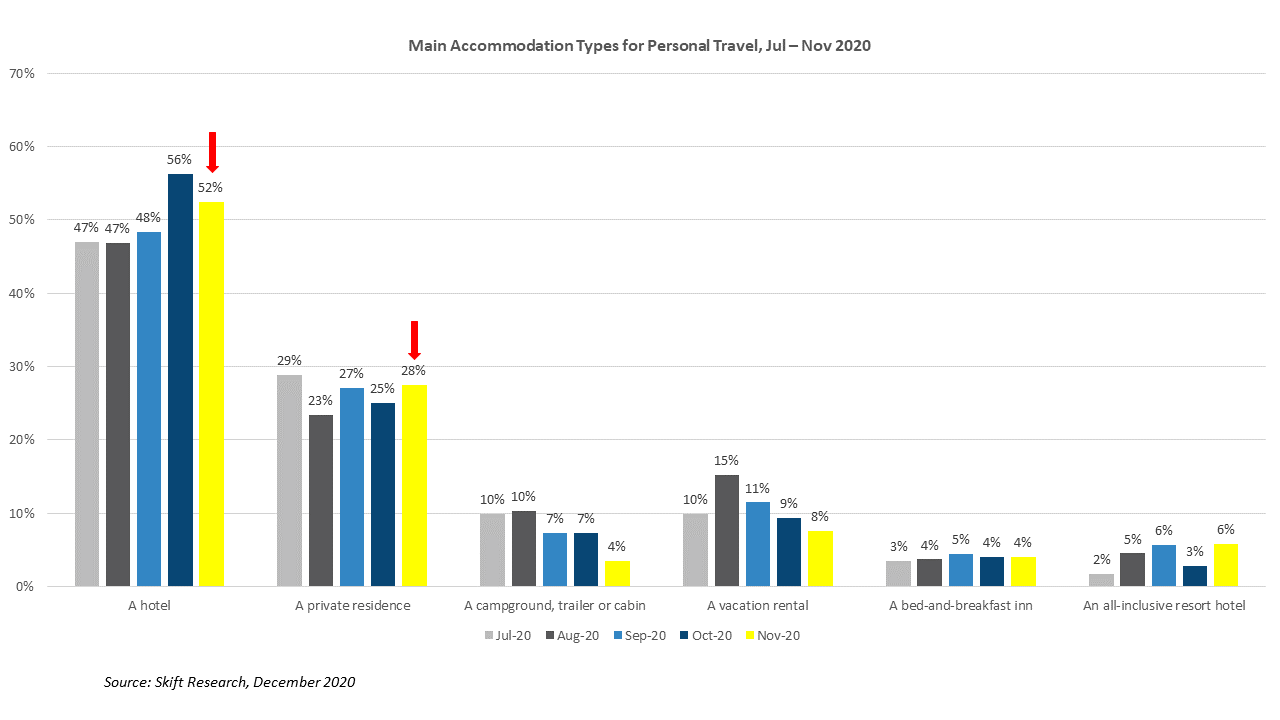 Many Americans planned to travel to spend time with families for the holiday but had to cancel the trip either for fear of the virus spread, or due to reinstituted travel restrictions in places they planned to travel to and from. Travel cancellation and rearrangement rates all increased as a result. More than a quarter of Americans surveyed said they had cancelled a pre-booked November trip and an equal number of them said they had postponed a pre-booked November trip to a later date. As we mentioned in our October Report, we fielded the October survey on November 2–4, before the election result was revealed, so we could take another pulse of consumer sentiment pre-election and compare it to the November survey and see if there were any major differences. Interestingly, we saw that Americans’ economic outlook became more polarized again, as with the months leading to the November election. Only 16% of Americans believed the U.S. economy would remain unchanged in the next 12 months. On the two ends, 39% expected the economy to be better, vs. 45% expecting the economy to be worse. At the personal level, 35% of American consumers expected their financial condition would be better in the next 12 months and 30% were concerned that they would be worse off financially. In early December, 35% of surveyed Americans said they expected to increase travel spending in the next 12 months, up from 32% in October. On the other hand, 25% expected to decrease travel spending, unchanged from November. Looking back, beginning in September, for the first during the pandemic, more Americans plan to increase rather than decrease their travel spend over the next 12 months. The positive spread continues to widen. 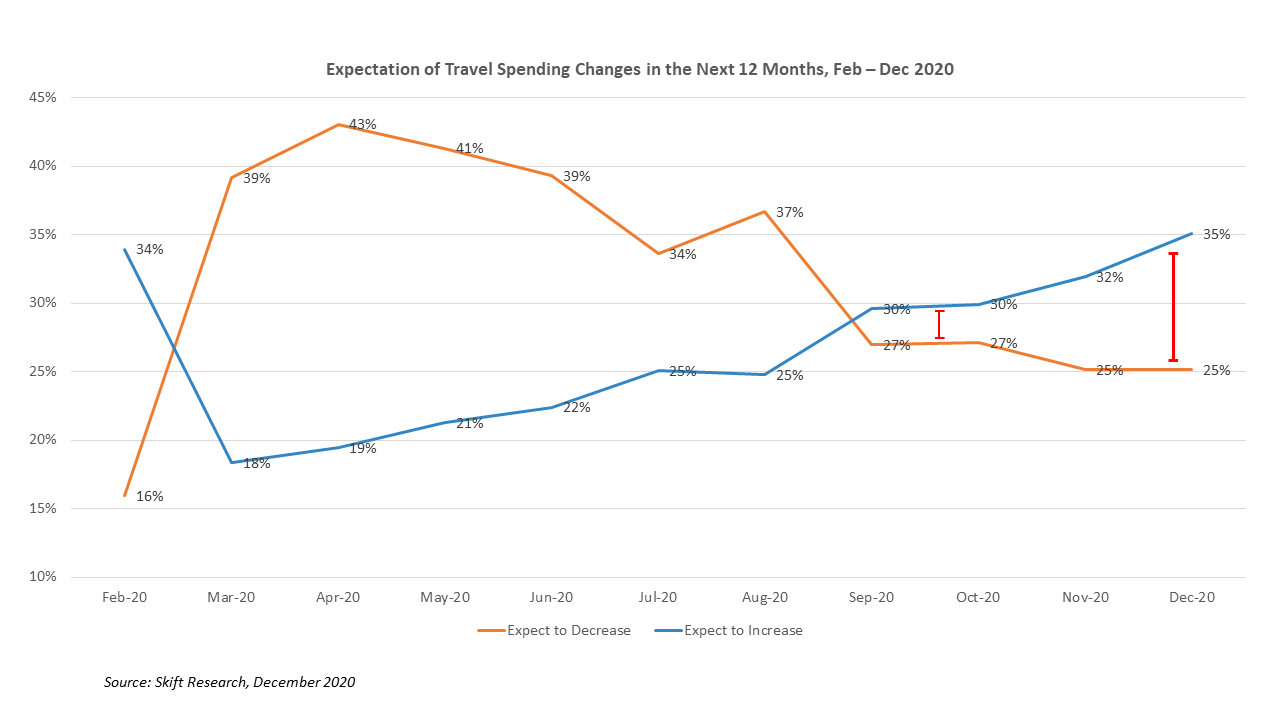 Americans’ fear of the pandemic continued to follow the ups and downs of the case counts. Fifty-six percent of Americans in our early December survey were very concerned about the virus, up from 52% in November. And 46% of consumers indicated their lives were very much impacted by the virus, increasing from 40% a month ago. 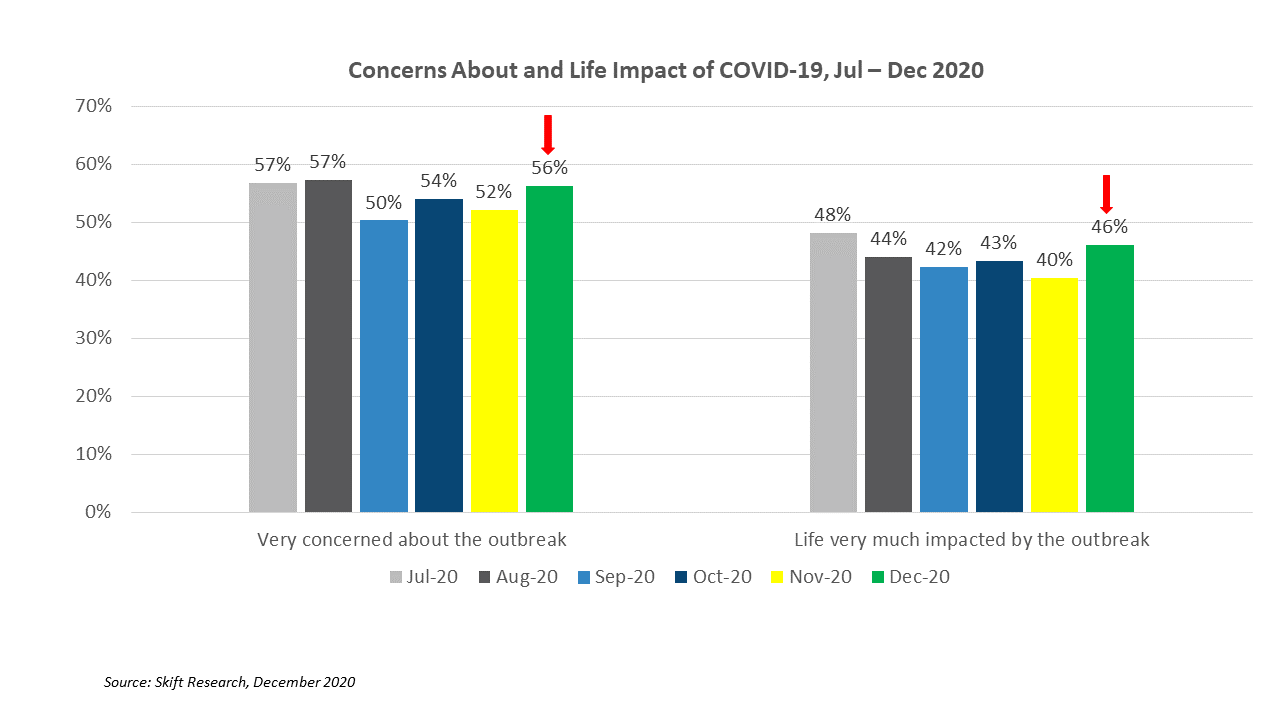 In total, 44% of the November survey respondents believed the virus to be contained by the first half of 2021, little change from the previous month. On Friday December 1, the U.S. Food and Drug Administration (FDA) issued the first emergency-use authorization (EUA) for Pfizer-BioNTech’s COVID-19 Vaccine to be distributed in the U.S. Following that, millions of doses of the Pfizer-BioNTech vaccine have been prepared for shipment across the country over the weekend. This extremely encouraging news might bring hope to ending the pandemic in the next few months. While relatively stable for the past few months, the number of consumers expecting to delay travel until a year or more after travel restrictions are lifted rose slightly, with a quarter of Americans saying so in early December. 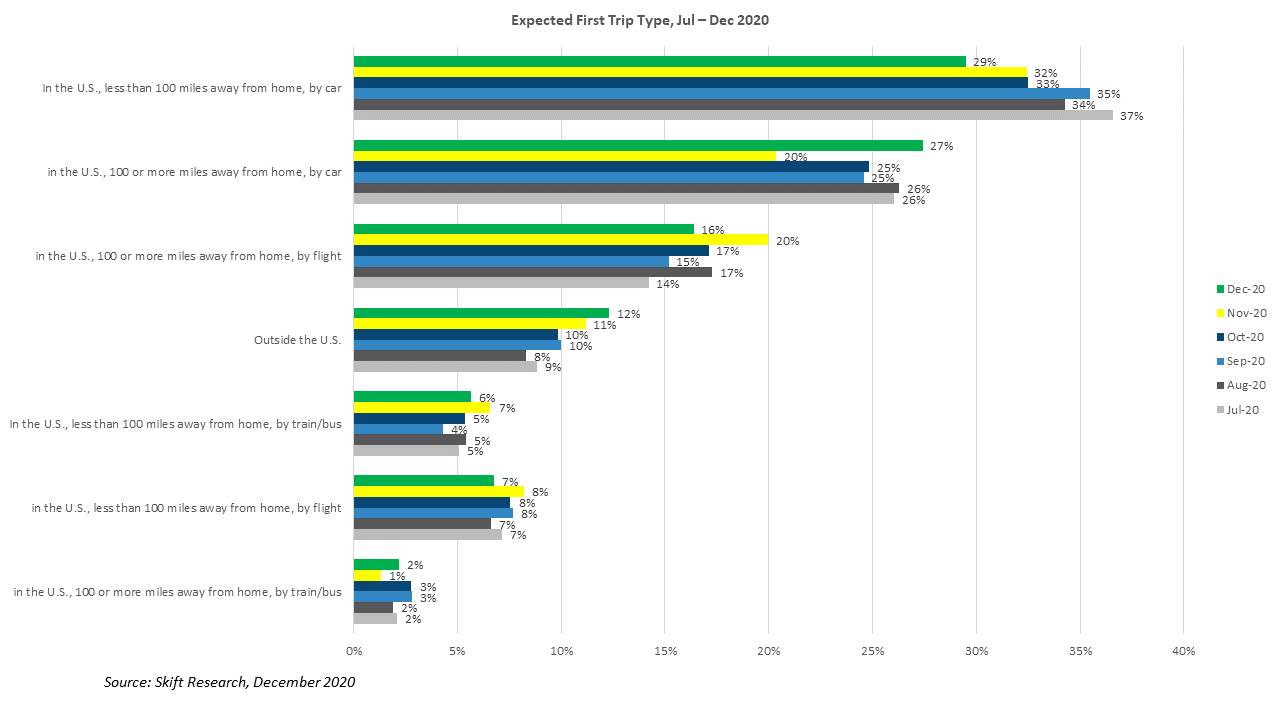 The number of consumers who said they would likely change their accommodation type, transportation mode, and destination type remained relatively stable for the past few months. 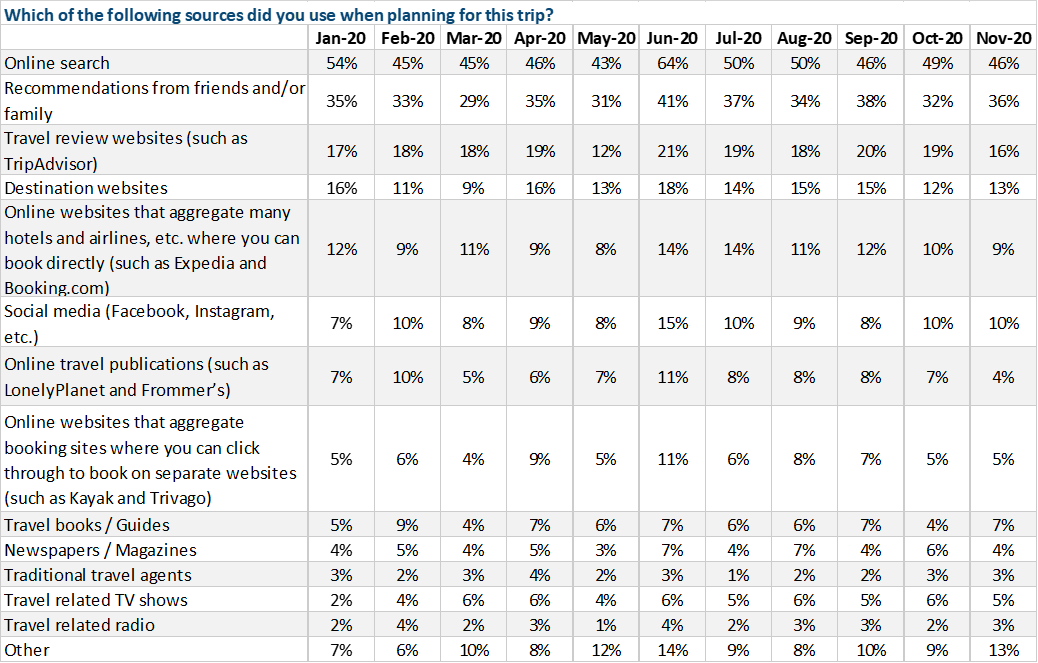