May seems to be a month of recovery for the U.S. travel industry. We are all too familiar with the many images of people jam-packed everywhere to celebrate the Memorial Day weekend. Yes, summer is coming and people can’t wait to travel again after staying at home for two months. According to our May U.S. travel tracker survey, 24% of Americans traveled in May, up from 19% in April.

However, the coronavirus is still here. As we were preparing for the report, some U.S. states were seeing the highest new coronavirus cases per day since the outbreak started. More than half of the consumers in our May survey believe the outbreak will last beyond the end of 2020 and don’t expect their lives to be back to normal until at least 6 months after the outbreak is under control. A full travel recovery might take a much longer time than what people hoped for or estimated.

In this report, we highlight new trends in travel incidences, consumer sentiments and future travel intents distilled from our May Travel Tracker survey.

In addition to the factual travel occurrences, we also asked respondents their perceptions on the macro-level economic condition as well as their personal financial and travel outlook. Given those questions reflect what respondents felt at the time of the survey, the date for those questions that we refer to in this report is the month when the survey was conducted, instead of the month when travel happened.

Highlights of May U.S. Travel

As all the states are slowly reopening, travel incidence increased to 24% in May. Most of the travel trends as we saw in March and April continued in May, including how people were travelling and where people were travelling to. While people are more open to taking vacations rather than visiting families now, local and traveling by car might be the mainstay for upcoming summer vacations.

After reaching rock bottom in April when the entire country was under lockdown, May saw some hope of a bounce back. Nearly a quarter of American consumers surveyed said they traveled at least once in May, five percentage points higher than in April. Our newly launched Skift Recovery Index pointed to the same direction. The index score for the U.S. travel industry, which is based on our weighted analysis of travel performance indicators as well as relevant macroeconomic data, reached the lowest point of 26.2 in the week of April 5. By the week of May 24, the score climbed to 37.9 Percentages of trips that included flights dropped to merely 7% for all personal travel in May, down from 9% in April. We don’t have an April number for business travel, but in May, only 14% of business travel included flying, compared to 61% in January, before the pandemic started. 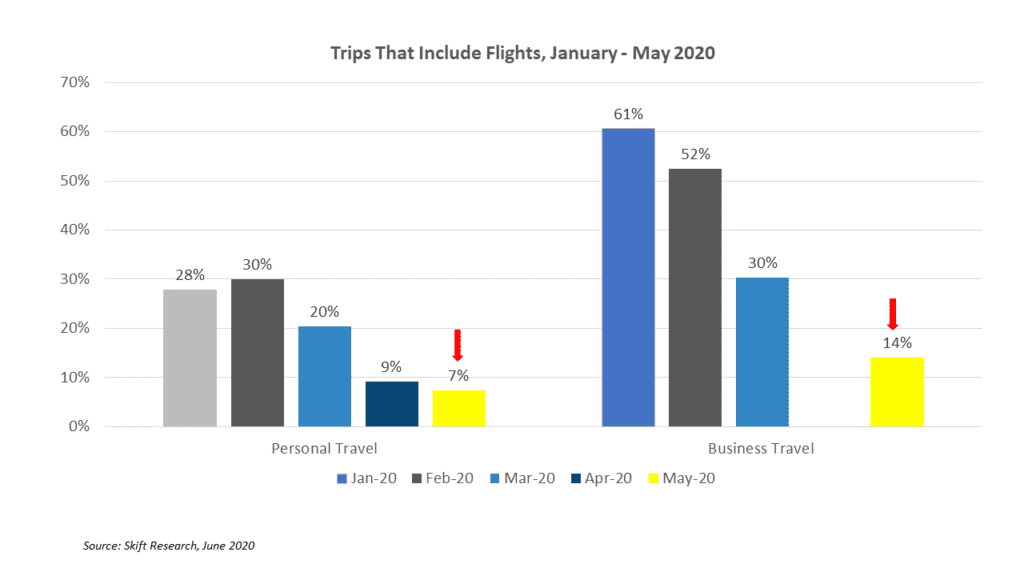 With businesses re-opening, more people started to travel for vacation again in May. In April, only 16% of all trips were for leisure purposes. The number for May jumped to 28%. With the summer travel peak coming up, and more states continuing to lift restrictions on non-essential businesses, we expect to see further increase of vacation trips in the next few months. Thirty-four percent of all trips in May were travelling to less densely populated small towns, as people continue to avoid urban centers. However, with the rise of vacation trips, beach going climbed to account for 26% of all trips, close to the pre-COVID rate of 28% in January. 6. With All the Changes, Business and Personal Trips Still Differed

As we have previously reported, personal travel since the beginning of the outbreak was mostly to visit or stay closer to families. Because of that, paid accommodation declined sharply and non-paid private residence rose to be the most used accommodation type. This trend continued in May. However, for business travel, the change is very insignificant, with the only difference being a slight shift from a standard hotel to other paid accommodation types, including resorts, B&Bs, hostels, and vacation rentals. And with fewer people traveling for business, the shift there needs to be taken with a grain of salt. We will continue to track the numbers when business travel is picking up more speed and see if there is any long-lasting shift in behaviors. 1. Outlook on the U.S. economy continued the upward rise

Since the initial dismay in March with the huge uncertainties around the extent of the outbreak, U.S. consumers have been gaining confidence about the economy steadily. In early June when we conducted the survey, 26% of U.S. consumers expected the U.S. economy to be slightly better in the next 12 months, higher than the 21% of those who said so in January. However, more people switched from thinking the economy would remain stable to believing it would be much worse, with 21% of consumers stating the economic condition would be much worse in the next 12 months in June, in contrast with 9% of those stating so in February. 2. Sentiment on the Personal Financial Situation Changed Slightly From May

Following the same trajectory as the macro-economic outlook, sentiment on the personal financial situation has been tilting towards the positive side since May. It’s likely that part of the reason for the optimism is for the consumers who are suffering financially now due to job losses or salary cuts, they believe their situation will improve from this low point as businesses reopen and they regain their jobs. Forty percent of consumers surveyed in June said they expected to spend less on travel in the next 12 months, compared with 23% of those who said they planned to increase spending, little changed from May. 4. Concerns and Impact of COVID-19 Continued to Decline

Concerns about the virus and the perceived impact of the virus on personal lives continue their downward movement. In early June, 52% of surveyed Americans said they were very concerned about the coronavirus, down from 56% in May, and 46% indicated their lives were very much impacted by the virus, down from 52% in May. In our May survey, we added a question to try to understand more details on the perceived impacts on life of COVID-19. How much of these impacts is subjective? How much is self-imposed impact and how much is factual? We found that it’s a mixture of all. Not being able to eat out or travel was listed as the top impacted behavior. Around a third of consumers felt very stressed or fearful. On the other end, even though the number of people who suffered a serious impact is small, it paints a dire picture of how severely the outbreak has affected Americans’ lives. Ten percent of surveyed consumers said they lost their jobs and another 8% got salary cuts. As to the virus affliction rate, 5% of surveyed Americans said their close family members got sick with the virus, 3% reported they lost family members or close friends due to the virus, and 1% said they themselves got sick with the virus. 4. Yet More People Are Seeing the Fight with the Coronavirus as a Longer-Term Battle 1. Nearly 50% of Americans Planned to Travel Again Within 6 Months After Travel Restrictions Were Lifted

The number of people who planned to travel soon remained fairly stable for the past three months. As we previously reported, consumers were eager to travel again once there was more reassurance of safety concerns. The numbers changed very little in terms of the expected first trip type for the last three months. Nearly 40% of consumers planned to take a local trip by car when they start to travel again. 3. Number of Consumers Who Said They Would Change Their Travel Preference for at Least One Part of Travel Post-COVID-19 Dropped

Compared to May, there was a big drop in numbers of consumers who expected to change their future travel preferences in June. The biggest drop comes from accommodation preferences. 29% of surveyed consumers said they were considering changing accommodation types post-COVID, a steep decrease from the 42% who said so in May. The numbers for transportation and destination preference changes also went down significantly.

As stated above, even though more people were predicting COVID-19 would take a long time to be under control, fewer people felt concerned about it. The same trend applies here as well. As people learn to cope with living in the COVID situation better, they feel safer to resume what they used to do, with caution. 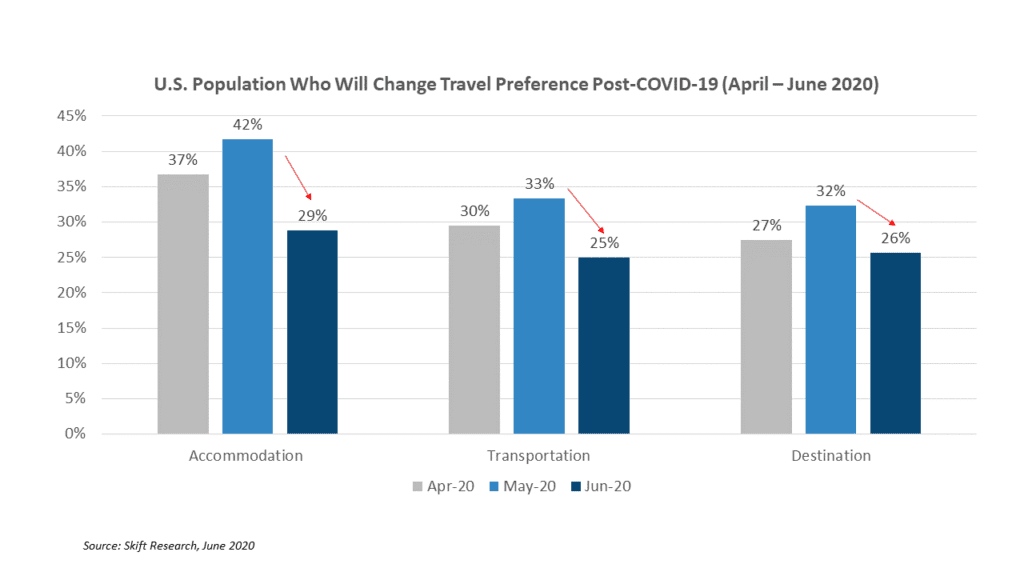 Accommodation preference
We added a question to our survey asking consumers to self-report their most often used type of travel before COVID-19. Below, we compare their stated pre-COVID behavior with what consumers reported as their prefered type of travel to use during the crisis. This data demonstrates how consumer preferences have shifted in response to the virus outbreak. In June, 63% of consumers said branded chain hotels were their most often used accommodation type pre-COVID-19. But for those who said they were likely to change accommodation preference as a result of the outbreak, only 38% selected branded hotels as the most desirable type of place to stay at present. Independent boutique hotels and B&Bs gained shares as the most preferred stay types in June. What’s interesting is the reasons behind the planned changes. “I believe they have higher cleaning standards” is selected as the No.1 reason for choosing a preferred accommodation type across those who preferred branded hotels, resorts, and boutique hotels, and as the No.2 reason for those who preferred to stay in vacation rentals. The No. 1 reason for selecting B&Bs is because “I have more trust in them handling the safety concerns”. For vacation rentals, having better control of the environment and easier to keep social distance stood out as the dominant reasons. That many gave the same or similar reasons for their selections yet wound up choosing different accommodation types, suggests to us that preference changes were mainly the result of personal perception and association of what each accommodation type offers, rather than the actual services on offer.

It’s also interesting to see a small but significant number of people saying they preferred to switch to boutique hotels, B&Bs and short-term rentals because they wanted to support local and small businesses, a trend we’ve been seeing coming out of the local awareness accentuated because of COVID-19. Destination Preference
The uptake in beach and small town preferences in earlier months came down slightly in June. Again, we believe this is related to the other changes we mentioned earlier in the report, as a result of coping and resumed normalcy. Other January – May Data