With 33% of Americans taking at least one trip, June travel tells a promising story of the reopening. But it might be a very short-lived promise.

For the most part, June seems to be a month of continued recovery for the U.S. travel industry, as a result of many states lifting restrictions and resuming business as usual. According to our June U.S. travel tracker survey, 33% of Americans traveled in June, up from 24% in May.

However, the promise has already proven to be a false one. With soaring new coronavirus cases, the states that were opening too soon are re-imposing restrictions. We expect to see deeper declines as a result in the following months.

In this report, we highlight new trends in travel incidences, consumer sentiments and future travel intents distilled from our June Travel Tracker survey.

Nearly 33% of Americans took at least one trip in June, only eight percentage points lower than February, when life was still normal and COVID was a remote concern. Consumers resumed vacationing. Thirty-one percent of trips taken in June were for the purpose of vacations, barely three percentage points lower than the number in February. Interestingly, business travel, including general business and meetings, shows and conferences, continued to account for a higher share of total trips in the past three months than in January. With the total travel incidence rate still low, this is likely due to the low business travel incidence rate as a result of seasonality in January rather than a sign that business travel is recovering faster than leisure travel. Private residence rose to be the most used accommodation type in May, following three months of continued rise in popularity since March. However, with more truly leisure trips, June was a good month for the U.S. lodging sector. Forty-three percent of personal trips in June involved hotel stays, an eight-percentage point jump from May. Campground and vacation rentals both saw significant growth as well. Our Skift Recovery Index scores echo the strong performance of the U.S. lodging sector. According to our Week of June 28 report, the U.S. lodging sector performed the best in June among the 15 major tourism markets we cover. After free falling for three months, air travel was finally showing a slight rebound. Limiting seat capacity, raising cleaning standards, and other safety procedures of major U.S. airlines might have started to catch consumers’ attention and played a role. Travel Cancellation and Rearrangement Slowed Down

While still high, the number of consumers who cancelled or postponed pre-booked travel due to the concerns about COVID-19 were down in June compared to May. After all, it’s not an economic issue, but a virus issue. Skift Research has tested and stated this in a few previous reports already. Discounts and lower prices are not a solution to winning market share or gaining revenue during this crisis. Consumer behavior is viable proof of this argument. Booking travel because of a lower price has remained consistently low since the beginning of the outbreak. That people are not traveling is a safety issue, making price cuts mostly irrelevant. Outlook on the U.S. economy continued the upward rise

Despite another surge of COVID cases and the reinstatement of lock-down policies, American consumers are still showing some optimism about the economy. Thirty-seven percent of surveyed Americans in early July believed the U.S. economic condition would be better in the next 12 months, compared to only 31% who thought so in February. Following the same trajectory as the macro-economic outlook, sentiment on the personal financial situation has been tilting towards the positive side since May. It’s likely that part of the reason for the optimism is that consumers who are suffering financially now due to job losses or salary cuts, believe their situation will improve from this low point as businesses reopen and they regain their jobs. The trend of more consumers planning to decrease travel spending in the next 12 months that we saw since the pandemic has continued in July. However, the number continued to drop as the pent-up demand started to drive more people to consider traveling again. With the new surge of coronavirus cases, concerns about the virus and the perceived impact of the virus on personal lives started to rise again after falling in May and June. In early July, 57% of surveyed Americans said they were very concerned about the coronavirus, up from 52% in June, and 48% indicated their lives were very much impacted by the virus, up from 46% in June. The number of consumers who believe COVID-19 will be under control by the end of the year continues to decline in July. More than one third of Americans now expect COVID to be over in the second half of 2021 and beyond. Similarly, more people think it will take a long time for life to be back to normal even after the virus is under control. In early July, 26% of Americans surveyed predicted that life wouldn’t be back to normal until a year or more after the outbreak, a six-percentage-point jump from June. 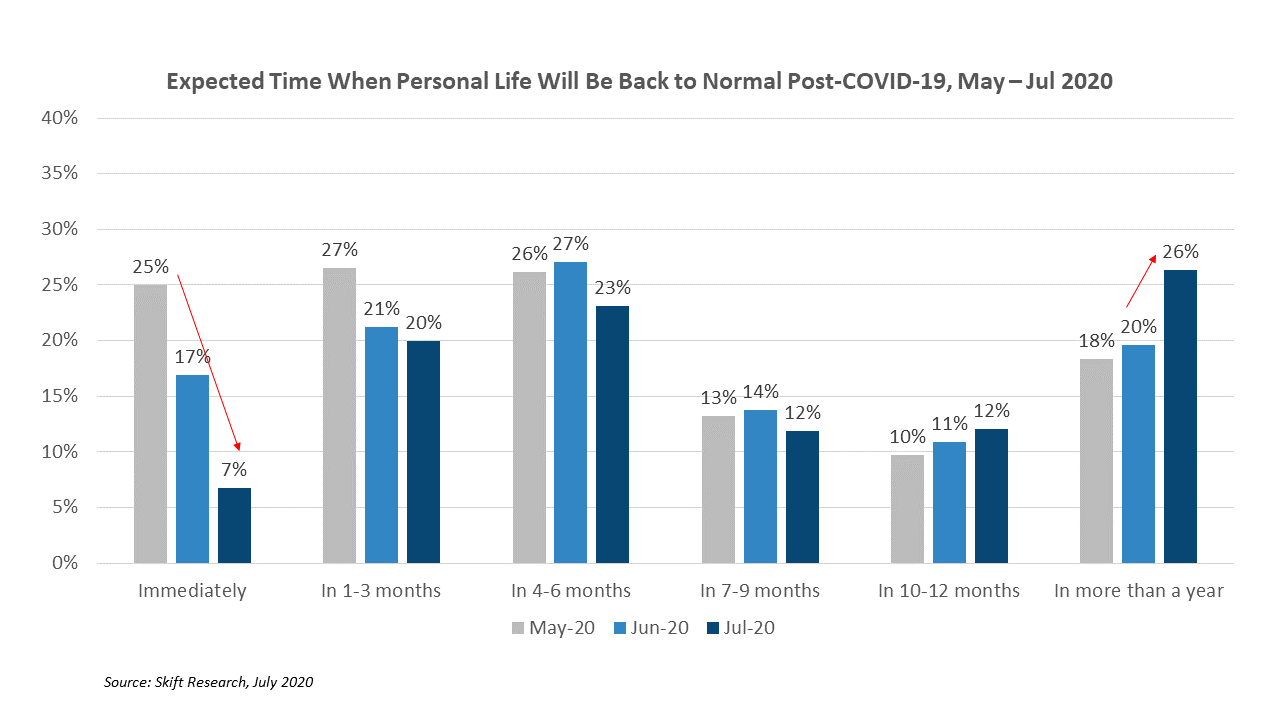 After holding fairly stable for the past three months, the number of people who planned to travel soon after travel restrictions were lifted started to decline in July. The numbers changed very little in terms of the expected first trip type for the last four months. Nearly 40% of consumers planned to take a local trip by car when they start to travel again. The number of consumers who said they would likely change their accommodation type went up slightly from June to July. The numbers for transportation and destination preference changes remained at the same level as June. 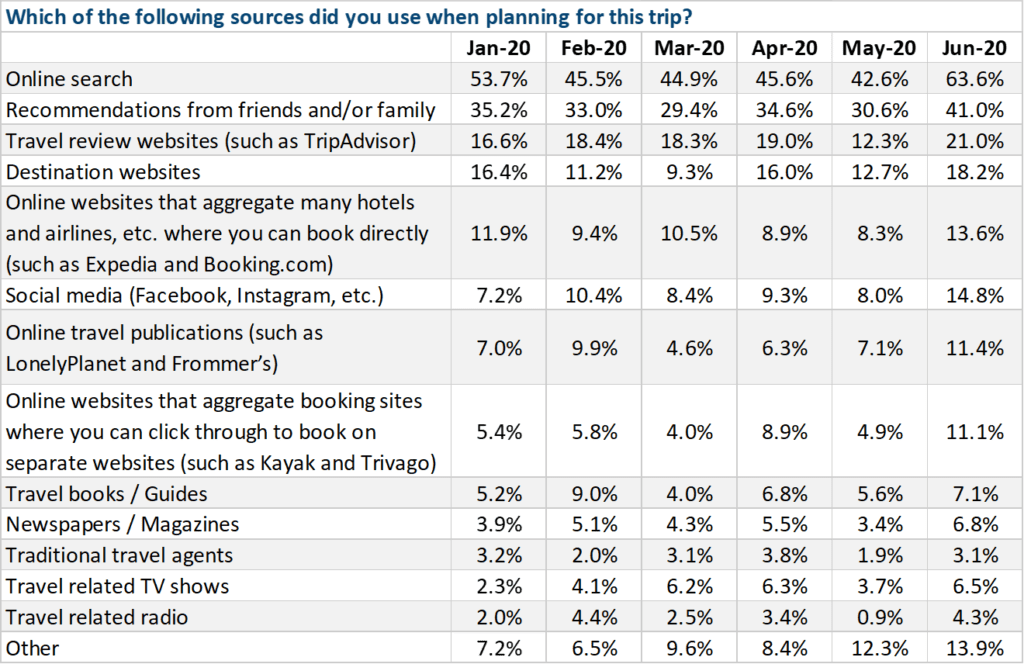